Dear Professor Sousa,
I am contacting you regarding opportunities for your students to volunteer with One Heart Source in South Africa and Jamaica. We still have a few spots available for our 2015 volunteer programs, and our final application deadline is March 20th!

One Heart Source is a non-profit organization designed to empower young people through education. We believe that your students, both graduate and undergraduate, will greatly benefit from the experience of working, living, and teaching in a different culture.
I would greatly appreciate it if you would consider sending the following information (below the line) about volunteering in South Africa and Jamaica to students of the Politics & Government Department through your mailing list. Please let me know if the message can be forwarded to your students.
If you or your students have any questions regarding our programs or organization, please feel free to contact me at any time! On behalf of the One Heart Source Family, thank you for your time and support.

As an OHS Volunteer, you will:


* Teach primary school students through a mentorship program focused on building strong Math and English foundations, while empowering students
* Lead after-school programs in non-traditional subjects like dance, debate, art, and sports
* Integrate yourself into and work closely with members of the local community to create positive social uplift
* Exchange ideas and culture with people from around the world
* Work with a small, dynamic team of international university and graduate students
* Develop empathy, confidence, and leadership skills while pursuing social justice

We at One Heart Source believe in creating lasting social change through education and human connection. We encourage you to take a step towards providing a more socially just future for some of the most marginalized communities in the world.


We will be hosting live online information sessions on March 8, 11, 15, and 18!
Join us by Registering Here!

Please contact volunteer@oneheartsource.org with any questions!
___________________
One Heart Source is a non-profit organization designed to empower young people through education and to provide high quality education and care for vulnerable children in Tanzania, South Africa, and Jamaica.
Posted by Unknown at 4:36 PM

THESE FELLOWSHIPS ARE FOR MAJORS IN ALL DISCIPLINES

Hanni Geist, the liaison for the DAAD in San Francisco, will offer the latest information on scholarship opportunities on Thursday, March 12, at 4:30 PM in WY203. The DAAD (German Academic Exchange Service) is the principal funding source of the German government for American students  applying for degree programs or research fellowships at German universities, institutes, and in industry. Many of the opportunities require no previous knowledge of German.

On behalf of the Council on Foreign Relations (CFR), I invite you to participate in the next session of the Winter/Spring 2015 CFR Academic Conference Call series on Wednesday, March 11, from 9:00 AM to 10:00 AM in WY 226. Farah Pandith, CFR's adjunct senior fellow, will discuss global efforts to counter violent extremism and offer policy recommendations for the United States.


Ms. Pandith served as the first-ever special representative to Muslim communities under former Secretary of State Hillary Clinton. She is currently a part of the leadership team at the Counter Extremism Project and a strategic advisor at the Risk Assistance Network and Exchange and has held a number of senior positions over the last decade, including political appointments in three administrations. Ms. Pandith left government in January 2014 for the Harvard Kennedy School. She was formerly senior advisor to the assistant secretary of state for Europe and Eurasian affairs (2007-2009), director of Middle East regional initiatives at the National Security Council (2004-2007), and chief of staff of the Bureau of Asia and the Near East at the U.S. Agency for International Development (2003-2004). She has served as a consultant in the public, private, and nonprofit sectors. Ms. Pandith received a master's degree from the Fletcher School of Law and Diplomacy at Tufts University, where she specialized in international security studies, Islamic civilizations and Southwest Asia, and international negotiation and conflict resolution. She received an AB in government and psychology from Smith College.

If you're interested in attending this call, please RSVP to Professor Seth Weinberger at sweinberger@pugetsound.edu ASAP.

Hope to see you there!

Fall semester PG course followed by
a trip to Cuba in January 2016.
All prospective applicants to this course should attend this session. On behalf of the Council on Foreign Relations (CFR), I invite you to participate in the next session of the Winter/Spring 2015 CFR Academic Conference Call series on Thursday, February 26, from 9:00 AM to 10:00 AM in WY 226. John Campbell, CFR's Ralph Bunche senior fellow for Africa policy studies, will discuss the political and security implications of Nigeria's Independent National Elections Commission's decision to postpone the February 14, 2015 presidential elections until March 28, 2015.
Prior to joining CFR, Ambassador Campbell was a U.S. Department of State foreign service officer serving twice in Nigeria, first as political counselor from 1988 to 1990, and then as ambassador from 2004 to 2007. His other overseas postings include Lyon, Paris, Geneva, and Pretoria. Past assignments include deputy assistant secretary for the bureau for human resources, dean of the Foreign Service Institute's School of Language Studies, and director of the Office of UN Political Affairs. Ambassador Campbell was a visiting professor of international relations at the University of Wisconsin-Madison and a U.S. Department of State mid-career fellow at Princeton University's Woodrow Wilson School of Public and International Affairs. Prior to his career in the foreign service, he taught British and French history at Mary Baldwin College in Staunton, Virginia. Ambassador Campbell published his book, "Nigeria: Dancing on the Brink," in 2010. He writes the blog "Africa in Transition," and edits the Nigeria Security Tracker.
As background for the discussion, you may wish to review the following materials:
1) John Campbell, "Why Were Nigeria's Presidential Elections Postponed?" Africa in Transition, Blog, Council on Foreign Relations, February 9, 2015.
http://blogs.cfr.org/campbell/2015/02/09/why-were-nigerias-presidential-elections-postponed/?cid=emc-ACC_Campbell-Blogpost-022615
2) Seth Kaplan, "How Inequality Fuels Boko Haram," ForeignAffairs.com, February 5, 2015.
http://www.foreignaffairs.com/articles/142958/seth-kaplan/how-inequality-fuels-boko-haram?gp=140219:179fb39c5509cd92
3) John Campbell, Nigeria's 2015 Presidential Election, Contingency Planning Memorandum Update, Council on Foreign Relations Press, February 2015.
http://www.cfr.org/nigeria/nigerias-2015-presidential-election/p36087?cid=emc-ACC_Campbell-CPMUpdate-022615
4) John Campbell, "Good Luck, Jonathan," ForeignAffairs.com, January 27, 2015.
http://www.foreignaffairs.com/articles/142821/john-campbell/good-luck-jonathan?gp=140172:1aada1825508aad1
5) John Campbell, U.S. Policy to Counter Nigeria's Boko Haram, Council Special Report No. 70, Council on Foreign Relations Press, November 2014.
http://www.cfr.org/nigeria/us-policy-counter-nigerias-boko-haram/p33806?cid=emc-ACC_Campbell-CSR-022615
6) "Nigeria Security Tracker," Interactive, Council on Foreign Relations.
http://www.cfr.org/nigeria/nigeria-security-tracker/p29483?cid=emc-ACC_Campbell-SecurityTracker-022615
Please RSVP to Professor Seth Weinberger at sweinberger@pugetsound.edu ASAP if you'd like to attend.
Hope to see you there!
Posted by Unknown at 11:46 AM

Candidates should have an interest in the legislative process and civic service, possess excellent writing and communication skills, and work well as part of a team. Interns in the DC Office will be responsible for projects such as writing correspondence, providing support for daily legislative tasks, fielding constituent phone calls and other requests. Other duties include leading Capitol building tours and providing staff with general office support. During their term, interns will also have the opportunity to attend briefings and committee hearings of personal interest and complete individual and team goals.

Internships can be part-time or full-time requiring approximately 10-20 (part-time) or 30-40 (full-time) scheduled hours per week during posted business hours (9:00am to 6:00pm). Part-time interns are welcome to work more than 20 hours a week. Full-time interns will receive a monthly stipend, transit benefits, and vacation and sick days. Current students will be given preference, but recent graduates are also welcome to apply. Interns may earn college credit, depending on the requirements of the institution. Strong preference will be given to applicants from the Puget Sound region.

Applicants must submit an internship application packet, including a letter of interest, resume, and 2 letters of recommendation via email (madison.strader@mail.house.gov) or to the following address:

Madison Strader
Office of Congressman Adam Smith
2264 Rayburn House Office Building
Washington, DC 20515
If you have any questions or need any assistance, please contact Madison Strader by phone at (202)
225-8901 or by email at madison.strader@mail.house.gov. 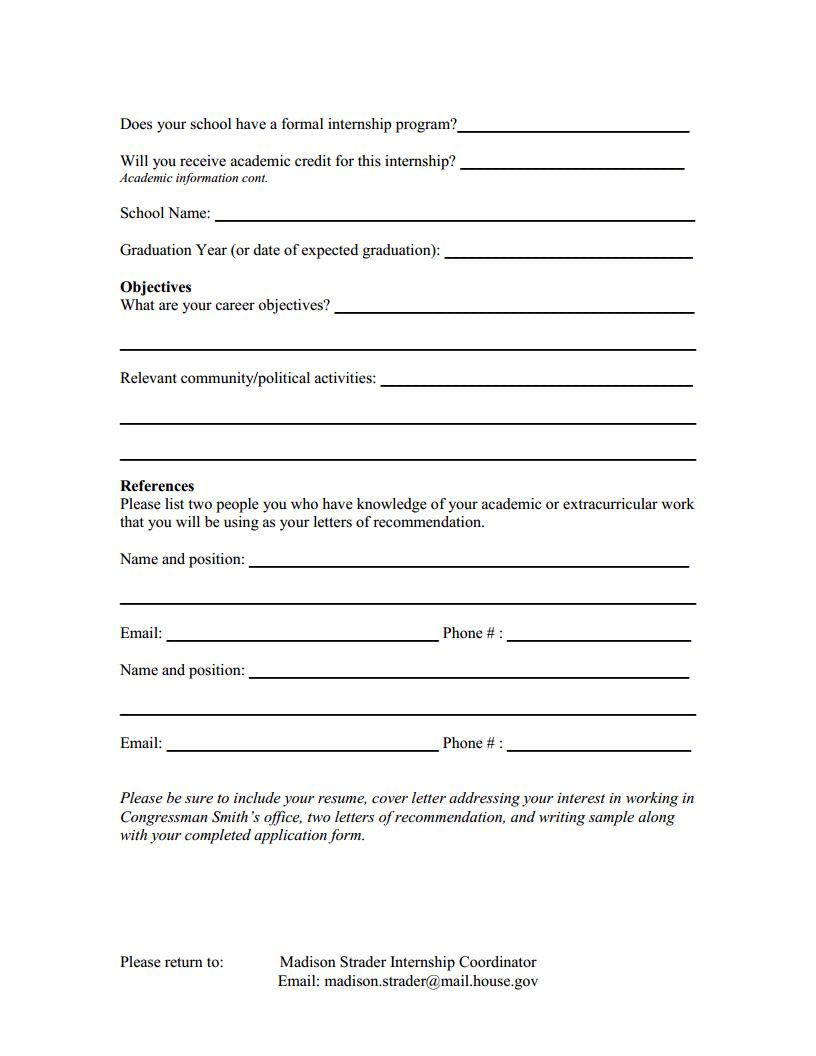 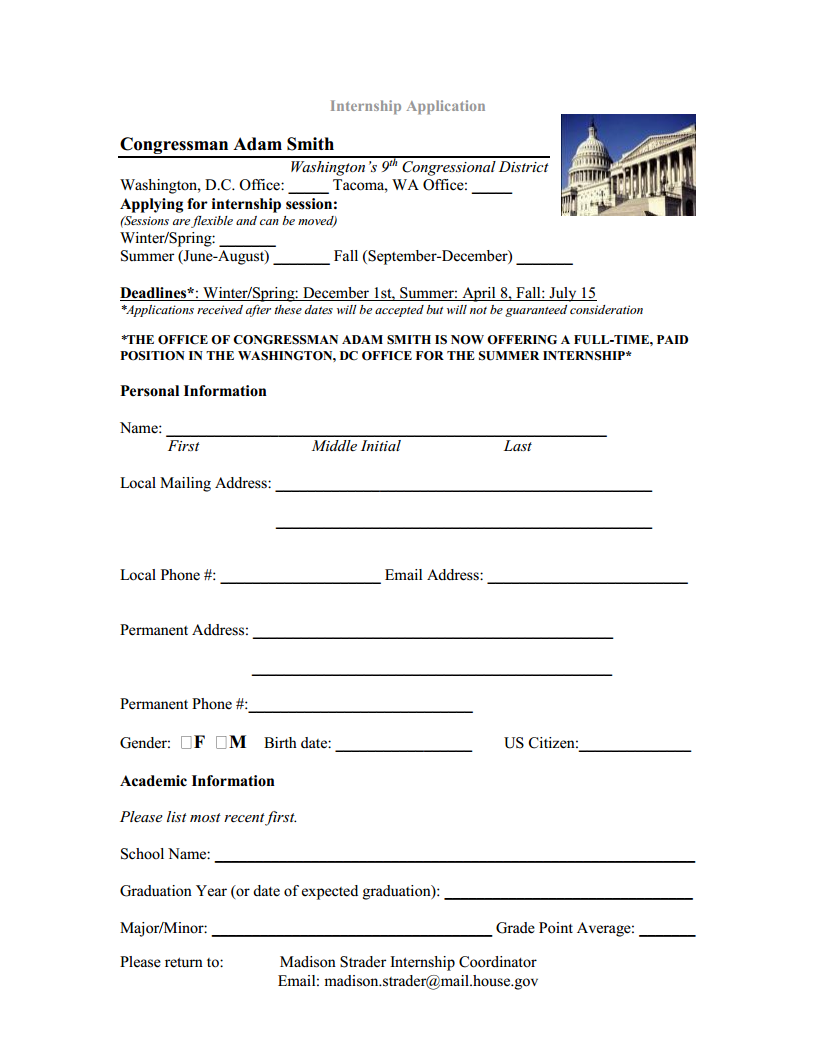 Please visit http://careers.state.gov/intern/student-internships for more information about the U.S. Department of State Fall 2015 Student Internship Program (unpaid), and to start the online application process via USAJobs. Please note that the deadline to submit completed applications is March 2, 2015.

We highly encourage you to complete and submit your application as soon as possible.

This program offers U.S. citizen undergraduate and graduate students the opportunity to participate in 10-week, unpaid internships that provide intensive educational and professional experience within the environment of America’s principle foreign affairs agency.

The unpaid internships are available at many of the over 270 U.S. embassies, consulates and missions to international organizations around the world, as well as at the Department of State in Washington, D.C. and other locations throughout the U.S. Participants gain first-hand, hands-on experience, and learn the realities of working in – and with – Foreign and Civil Service professionals who are at the forefront of America’s diplomatic efforts.

As an unpaid intern, you may have the opportunity to:
So consider spending your Fall 2015 with the U.S. Department of State, witnessing and participating in the formulation and implementation of U.S. foreign policy, working closely with the U.S. diplomats and civil servants who carry out America’s foreign policy initiatives. You’ll not only have an experience of a lifetime, you may even earn educational credit.*

*Applicants who are selected for a U.S. Department of State Student Internship Program (unpaid) can contact the selecting bureau, or the central Student Programs office, if they require further details about the program to support their request for academic credit.

Visit our forums if you have any questions, or to search for topics of interest. The forums can be found under Connect on the careers.state.gov website. You can also search our FAQs for more information.

We appreciate your interest in a career with the U.S. Department of State. 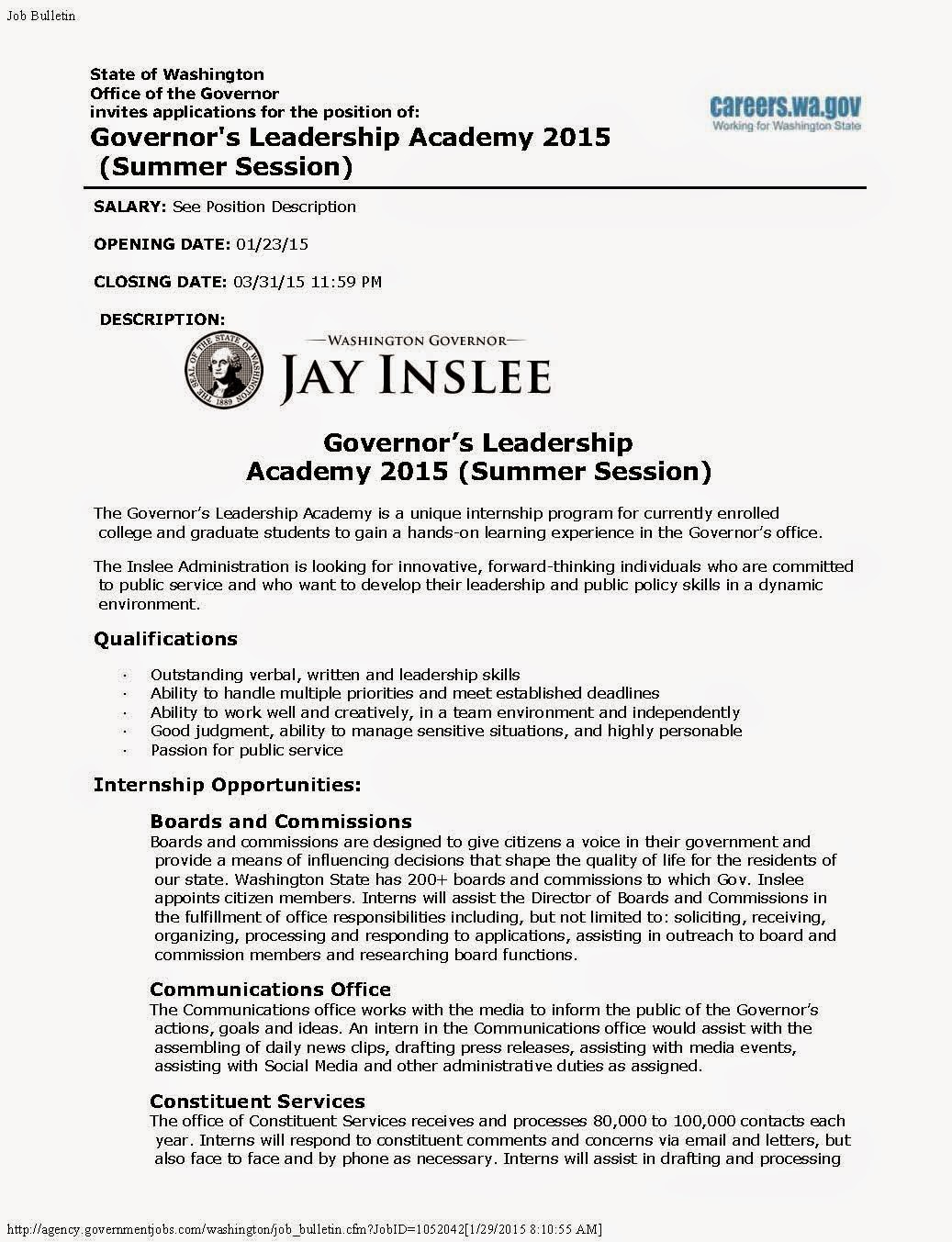 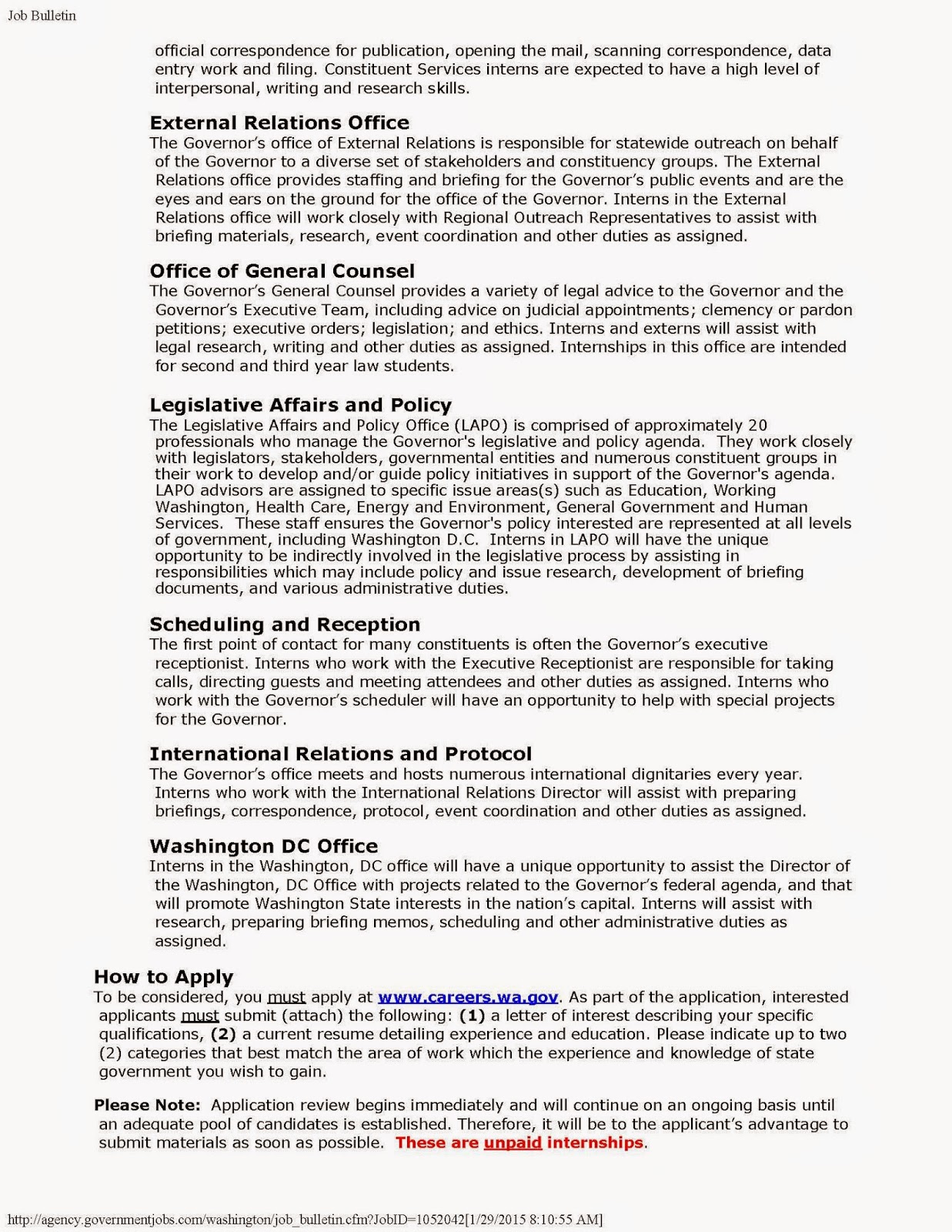 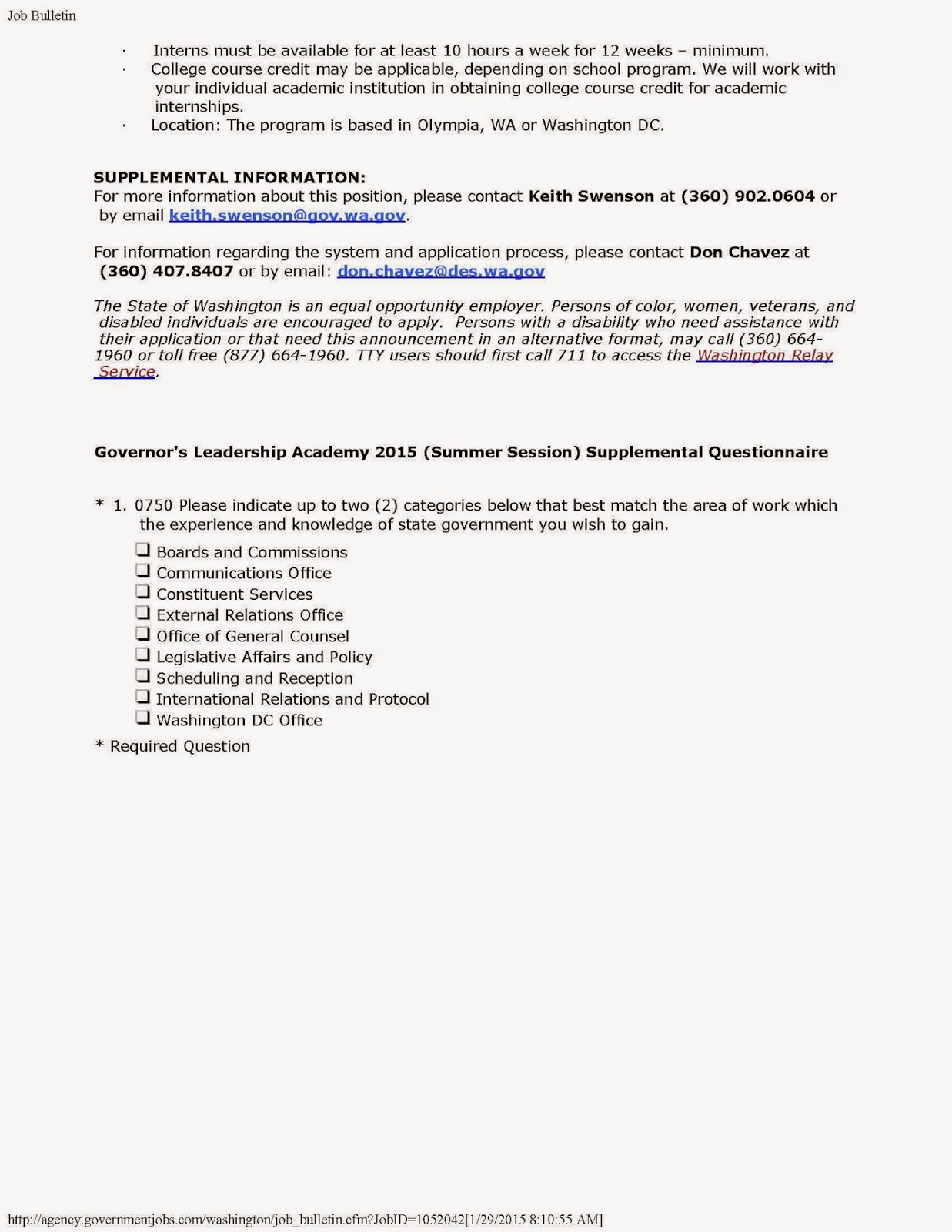