From: Representative Adam Smith [mailto:imawa09@mail.house.gov]
Sent: Wednesday, December 12, 2012 5:08 PM
Congressman Adam Smith seeks a Constituent Services Representative to perform casework duties and assist constituent interactions with federal agencies including but not limited to: Army Corps of Engineers, Department of Defense, Department of Veterans Affairs, Social Security Administration, Department of Housing and Urban Development, Small Business Administration, and Internal Revenue Service.  This position will also coordinate forums relating to the assigned areas and support other administrative and outreach functions for a positive office environment and proactive customer service to constituents. Exact portfolio to be determined by the needs of the Congressional District and staff expertise.

Prior experience working for Congress or performing casework is preferred. Candidates should demonstrate a professional manner; excellent oral and written communication skills; thoroughness and careful attention to detail; ability to exercise discretion and independent judgment; ability to work cooperatively and courteously with others in a fast-paced office; knowledge of federal agencies and the political process; a strong commitment to public service. Ties to and knowledge of the Ninth Congressional District are desired. A valid Washington State Driver's License is required. Proficiency in Spanish or a second language is a plus.

Minority candidates are strongly encouraged to apply. This office is an equal opportunity employer.

Salary range is $30,000+, dependent on qualifications and experience, with Federal employee benefits.

To be considered, please submit a cover letter and resume with references to officeassistantWA09@mail.house.gov no later than 5pm PST on Monday, December 31, 2012 with "CONSTITUENT SERVICES REPRESENTATIVE" in the subject line. No phone calls or drop-ins, please.
Posted by Irene lim at 5:41 PM

Hello:
We are now accepting applications to the Pathways Recent Graduate Program vacancy announcements for Budget Analyst, Program Analyst, Contract Specialist, Foreign Affairs Specialist, Paralegal Specialist and Human Resources Specialist. These Pathways Positions (GS-07) are available to those who graduated within the last two years (veterans have up to six years).

Please note that the deadline to submit completed applications is Friday, Dec. 14, at 11:59 p.m. OR until 11:59 p.m. on the day the 150th application is received.Applicants must be U.S. Citiziens who meet all eligibility and qualification requirements stated on the vacancy announcement, and must pass all required background and security investigations,.
We appreciate your interest in a career with the U.S. Department of State.
Visit our forums if you have any questions, or to search for topics of interest. The forums can be found under Engage on the careers.state.gov website. You can also searrch our FAQs for more information.

View all vacancy announcements on USAJobs.gov and start the online application process.
Posted by Zeke Rosenberg at 2:28 PM

Congressman Adam Smith seeks Community Liaison (full-time) to develop and implement a strong constituency outreach program. Duties include acting as a liaison to develop and maintain relationships, participating in meetings, speaking on the Member’s behalf, corresponding with constituency groups, monitoring important community issues for the Congressman, and working with other district staff on local projects. Coverage of night and weekend meetings/events is expected.

Prior experience working for Congress or community relations is preferred. Strong writing and verbal skills, an understanding of Congress and current federal policy issues are also desired. A valid Washington State Driver’s License is required.

Minority candidates are strongly encouraged to apply. This office is an equal opportunity employer.

Salary range is $28,000+, dependent on qualifications and experience, with Federal employee benefits.

One of our graduates, Matt Ferchen ('93), is now an Associate Professor of International Relations at Beijing's prestigious Tsinghua University. He recently had the following article published in The Diplomat: China's Misguided Hugo Chavez Love Affair

Professor Seth Weinberger would like to invite you to participate in the final conference call of the Fall 2012 CFR Academic Conference Call series on Wednesday, December 5, from 10:00 to 11:00 AM in Wyatt 326. Micah Zenko, CFR's Douglas Dillon fellow in the Center for Preventive Action, will discuss U.S. drone policy.

Prior to coming to CFR, Dr. Zenko worked for five years at the Harvard Kennedy School, and in Washington, DC, at the Brookings Institution, Congressional Research Service, and State Department's Office of Policy Planning. He has published on a range of national security issues, including articles in "Foreign Affairs," the "Journal of Strategic Studies," "Defense and Security Analysis," and "Annals of the American Academy of Political and Social Science," and op-eds in the "Washington Post," "Los Angeles Times," "Chicago Tribune," and "New York Times." Dr. Zenko writes the blog Politics, Power, and Preventive Action, which covers U.S. national security policy, international security, and conflict prevention.

Also, there are some recommended readings to prepare you for the call:

Hope to see you there…

We are writing to announce that the application for the Summer 2013 White House Internship Program is now open. As an intern alum, please consider sharing this opportunity with others in your community.


The White House Internship Program is designed to mentor and cultivate today’s young leaders, strengthen their understanding of the Executive Office of the President, and engage them in public service opportunities.

A complete application includes: short answers, two essay questions, a one-page resume, and two letters of recommendation. The deadline to apply for the summer program is January 27, 2013.

For more information and to apply, please visit http://www.whitehouse.gov/internships. 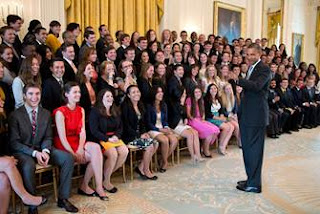 President Barack Obama talks with members of the 2012 Summer White House intern class before a group photo in the East Room of the White House, Aug. 7, 2012. (Official White House Photo by Pete Souza)
Posted by Zeke Rosenberg at 10:36 AM

College Degrees of the 1%

Want to lord your wealth over others?  Get a degree in political science and IR--

International Relations
About 6.7% of those holding an international relations degree make a top 1% income. Employment in this field varies and can include working in business, government, journalism, teaching, and international service for large multinational organizations like the United Nations or the Red Cross.

Political Science
Similar to obtaining a biology degree, political science majors traditionally are not seen as wealthy career paths. However, the opportunity to pursue law and senior management consulting exists. These professional careers could likely lead to an entrance into the 1%, and about 6.2% of political science degree holders already are in the 1%.

Article can be found here.
Posted by Patrick at 10:00 AM