Teach in Boston with MATCH. Deadline 4/30

We give recent college graduates one year of intense training. We then help them find positions in high-need schools, and continue to support them as they begin their careers in the classroom.

What sets MTR apart from other teacher prep programs? 1) We’re prescriptive, like a sports coach or piano teacher; you learn and practice very specific “Teacher Moves.” 2) Trainees are specifically being prepared to teach in certain charter schools with a track record of “turning around” low-performing kids. 3) We have a very particular approach, which involves building relationships 1-on-1 with kids and parents, then using those relationships to run a tight ship in class, enforcing rules consistently, and pushing/demanding a LOT from our kids.

MTR is no different from the MATCH Corps (our full-time tutoring program) from Monday to Thursday. However, unlike MATCH Corps, MTRs want to go on to become full-time teachers in high-poverty, “No Excuses” charter schools. So on Fridays and Saturdays, MTRs learn about the nuts and bolts of teaching, do tons of practice, and get a lot of coaching.

For more information click here
Posted by Unknown at 3:00 PM

Who Will Win the White House? 6 free Lectures at Puget Sound. Next Lecture: How Accurate Are the Polls? Thursday 4/28

Visiting political scientist Michael Artime, in the Department of Communication Studies, and independent presidential historian Mike Purdy ’76, M.B.A.’79 will provide a vigorous analysis of the 2016 campaign and some historical insights to put today’s news into perspective. They will lay out the hot-button issues in the current contest, and share some of the colorful and surprising stories that lay behind two centuries of presidential elections—ever since George Washington was unanimously elected in 1789.


January 21: The Long Road to 1600 Pennsylvania Avenue
February 18: Who Wants to be President?
March 10: What do the Candidates Believe?
March 24: What Voters and States Will Elect the Next President?
April 14: How Accurate are the Polls?
April 28: Media Marketing and the Making of the President

Click here for details.
Posted by Irene lim at 2:30 PM 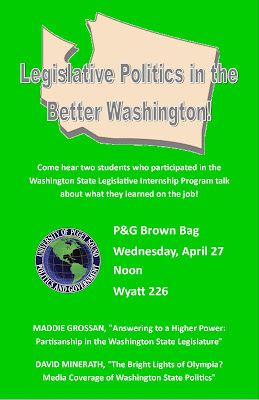 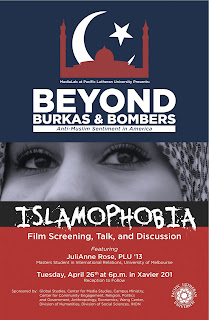 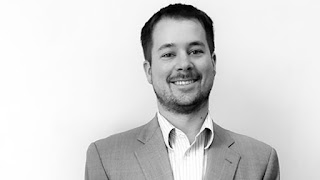 Come hear about the importance of maintaining open spaces for both human and ecological use in this lunch-time lecture and conversation! Learn more about the significance of conservation and ecological restoration efforts in the Puget Sound area from a renowned environmental politician.

Jordan Rash is the Conservation Director at Forterra. A graduate of Willamette University in Salem, OR, he spent summers working on family farms in Oregon and also served as a U.S. Forest Service firefighter in the high desert. He brings nearly a decade of political experience working for legislatures and elected officials in Oregon and Washington.
When: Tuesday, April 19th from 12-1pm
Where: Thompson 310
Posted by Unknown at 2:45 PM 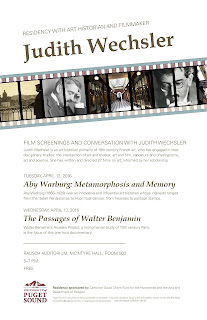 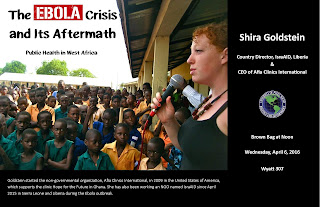 
I’ve been lucky in my life. I haven’t experienced much loss. The closest I’ve come to experiencing true grief has been losing my dog Sierra, my faithful and loving companion of 14 years. I was holding her when she died, and I remember the moment that the life went out of her body. One moment I was holding my dog, the next I was holding something that was no longer my dog. It was her physical form—her body, her eyes, her fur—but it wasn’t her anymore. Her soul had left and what remained was no longer Sierra. Because it wasn’t her physical form that defined her being, but rather her soul and her spirit.
Liz’s body may no longer be with us, but her soul and her spirit remain. These are the things that make a person. That make Liz Liz.

I use the present tense because, as Plato argued in The Republic, the soul is immortal. Liz’s soul and spirit were the things that made Liz so beloved by so many in the Puget Sound community and elsewhere. We experience the souls of other in two ways: Through our interactions with them and through our memories of those interactions. While we may no longer be able to interact with Liz, we have our memories of those interactions. And as long as we do, her soul and her spirit live on.

I knew Liz as her professor and as her academic adviser. When asked to describe Puget Sound students, I often say that they come here as naïve optimists who want to change the world, and leave as critical optimists, who still want to change the world but now understand how difficult that will be. I can think of few students who better fit this description than Liz Breysse. I first met Liz on her second day on campus in my role as her academic adviser; I was immediately struck by her confidence and her smile and her energy and her enthusiasm. Her soul and her spirit were almost literally bursting forth from her at all times.

When we met to discuss her first semester classes, I asked her why she signed up for Introduction to International Relations as her advising seminar. She responded by saying “Because I want to help bring world peace.” I hear that a lot from students, most of whom have no idea what “bringing peace” involved, how complicated the world is, or why war occurs in the first place. After all, that’s what I’m here to teach them.  But something in her voice made me believe that she meant it in a way that few students do.

Still, I responded as I generally do, by smiling and nodding and telling her that I looked forward to helping her come to understand the world better. But, I warned her, I expected her views to change as she learned and grew as a student of international relations.

Over the course of our classes together, Liz learned how difficult it is to end conflict between states or even between people. But that never diminished her desire to work towards peace. Just last semester, Liz was in Global Security with me and I remember her growing dismay as she came to realize that she was a realist: Someone who believes in the inevitability of conflict and in the folly of acting according to “good intentions” instead of according to the realities of power. Liz’s soul didn’t want to be a realist, but her brain told her that she was.

Her final paper for Global Security argued that the United Nations was ill-suited to manage the security problems of the modern era. As she discussed her argument with me, it clearly bothered her that a global, idealistic institution like the UN wasn’t the appropriate vehicle for pursuing peace. But that didn’t dim her enthusiasm…she just needed to find a different way to pursue peace.

Unfortunately, Liz won’t get that chance to find other, better ways to make the world a better place…to bring peace.

A quote on a remembrance of Liz handed out at an earlier memorial read: “Use your smile to change the world but don’t let the world change your smile.” Liz learned that a smile won’t be enough to change the world, but she never let herself become cynical and jaded (as I am!). She never stopped smiling. Even as we discussed problems of war, genocide, and other miseries that torment people all over the world, Liz always remained optimistic that we—that SHE!—could and would eventually fix those problems. Liz would have been a powerful force in the world and it breaks my heart that we won’t have the benefit of her soul and her spirit working for the good of all of us.

Like all of the professors at the University of Puget Sound, I came here because I love teaching…because I love my students. Liz was the kind of student who made me love teaching. She had a passion and excitement for learning that I wish every student had.

But don’t just take my word on it. Here’s David Sousa, who teaches American politics and had Liz in two classes: "Liz was a wonderful student in class, thoughtful, prepared, and eager to share her ideas and to listen to others. But she was an even better student before class, always there early, chatting people up as they came in, making my class feel like a community." And here's Chris Kendall, who teaches international law and taught Liz in his first semester here." "Liz was one of six students in my class on international law. She was always enthusiastic in class. But while working on a draft of her seminar paper on International Criminal Court prosecution for war crimes committed during the Syrian civil war, Liz came to office hours to discuss revisions. As we worked through arcane legal questions of mens rea and criminal jurisdiction, Liz would punctuate the conversation with an occasional "That's so cool!" or "Awesome!"—not the type of response you usually get from a student when talking about jurisdiction, and definitely not what I expect when giving them paper revisions. Liz's enthusiasm absolutely colored my introduction to Puget Sound that first semester.”

The physical body may decay and disintegrate—after all, as they say, ashes to ashes, dust to dust—but so long as we remember what makes Liz Liz and what Liz means to us, her soul is indeed immortal.

Jews have a saying to comfort those who are in mourning: May her memory be a blessing. To me, this reflects this very belief in the immortality of the soul. Our memories of Liz can serve to comfort us, to inspire us, to make us laugh, to make us celebrate life. We are indeed blessed for having known her.

And so to Liz's parents, Sheila and Matt, to her sister, to her family, friends, and loved ones... to her sisters in Pi Beta Phi, to her professors, to her colleagues in the politics and government department, and to those with whom she worked in the Cellar and during Orientation ...to the entire Puget Sound community, may Liz's memory be a blessing to us all.
Posted by Irene lim at 1:44 PM