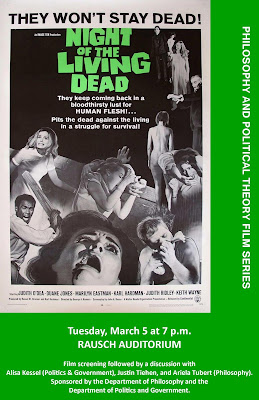 Posted by Zeke Rosenberg at 3:23 PM

On behalf of the Council on Foreign Relations (CFR), I invite you to participate in the next session of the Winter/Spring 2013 CFR Academic Conference Call series on Wednesday, March 6, from 10:00 to 11:00 AM in WY 226. Mark P. Lagon, CFR's adjunct senior fellow for human rights, will discuss the role of business in international relations and human rights obligations.

Ambassador Lagon is the international relations and security chair at Georgetown University's master of science in foreign service program and teaches multilateral politics and the ethics of international relations. From 2007 to 2009, he was U.S. ambassador-at-large at the State Department, directing the Office to Monitor and Combat Trafficking in Persons. Previously, Ambassador Lagon served as deputy assistant secretary in the Bureau of International Organization Affairs at the State Department; as a member of Secretary of State Colin Powell's policy planning staff; and on the senior staff of the Senate Foreign Relations Committee. He is a founding counselor of the Global Business Coalition Against Human Trafficking and is the author of "The Reagan Doctrine: Sources of American Conduct in the Cold War's Last Chapter."

As background for the discussion, you may wish to read the following materials:

If you’re interested in attending, please RSVP to me at sweinberger@pugetsound.edu.

“Peace Corps service is the opportunity of a lifetime and offers two years of international experience immediately upon graduation. Come to this information session to  learn about Volunteer experiences, have your questions answered, and gain tips to guide you through the application process."
Posted by Zeke Rosenberg at 3:25 PM

On Friday, March 1, the Politics & Government department is pleased to host a Skype conference call with David Sanger, the chief Washington correspondent for The New York Times. Mr. Sanger is also the author of two best-selling books on the foreign policy of the Obama administration, The Inheritance and Confront and Conceal. He has been a member of two teams that won the Pulitzer Prize and has received several awards for his coverage of the president and national security issues. Mr. Sanger will discuss issues of national security and foreign policy and take questions from the audience.

The call will take place on Friday, March 1 from 12:00 – 1:00 PM in Library 020. To RSVP for this event, please e-mail Professor Seth Weinberger at sweinberger@pugetsound.edu.

I have a really amazing full-time staff opening in our office!  We are looking for a Youth Support Services Coordinator for the WILD (Wilderness Inner-City Leadership Development) Program at InterIm CDA.

This would be a great position for a recent grad or young professional with youth development or environmental education experience, who loves working with Asian Pacific Islander teens, especially recent immigrants and refugees around issues of social and environmental justice. I have attached the job announcement for more information about the position.

Please pass this along to anyone who you think would be a good fit for our youth.  It's a short turn around time -- we are accepting applications (resume, cover letter and 3 references via hiring@interimicda.org) until March 6th.  We are hoping to have someone on board full-time by April 1. 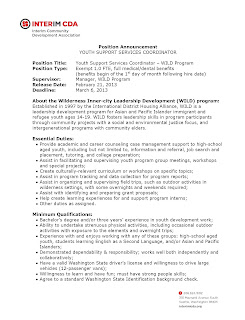 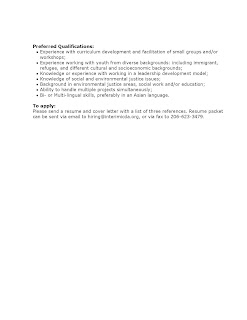 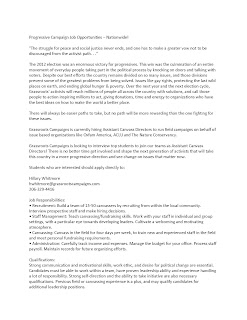 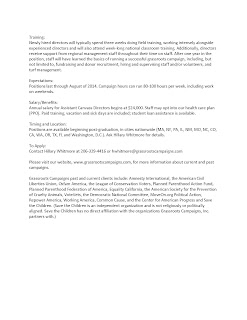 Posted by Zeke Rosenberg at 3:34 PM

a) The state of Washington is the top 3 for human/sex trafficking state in the US.
b) The motel areas near the Sea-Tac airport are the places where many trafficked victims are seen.
c) The most frequent places to encounter trafficked victims are: Backpage.com, Craiglist.org, truck stops, and local motels.
d) The average age of American girls who are trafficked is 13 years old.
e) The trafficked victims are from various ethnic groups and socioeconomic groups, such as the middle-class urban area household.
f) The most common places for pimps to 'recruit' girls: malls, high schools, and middle schools.

Come to these programs to learn more about the US domestic human/sex trafficking issues and how to stop trafficking of American minors.

- Part 2: A lecture by Dr. Cyndi Romine (CEO of the Called to Rescue, a non-profit organization that strives to stop human/sex trafficking of American minors in the US) Monday, March 11th, Wheelock Student Center Rotunda 6-8pm Free w/ UPS ID

- Part 3: Take Back the Night (Speaker Heather Corinna, "Your Rights to the Night" Workshop, and Consciousness-raising concert) March 27-29th (more info to be announced)

Posted by Zeke Rosenberg at 3:17 PM

On behalf of the Council on Foreign Relations (CFR), Professor Seth Weinberger invites you to participate in the next session of the Winter/Spring 2013 CFR Academic Conference Call series on Wednesday, February 20, from 9:00 to 10:00 AM in the Misner Room, Collins Memorial Library. Michael A. Levi, CFR's David M. Rubenstein senior fellow for energy and the environment, and director of the program on energy security and climate change, will discuss President Obama's climate change policies.

Before joining CFR, Dr. Levi was a nonresident science fellow and a science and technology fellow in foreign policy studies at the Brookings Institution. He is the author of the book "On Nuclear Terrorism" and coauthor with Michael O'Hanlon of "The Future of Arms Control." Dr. Levi was project director for the CFR-sponsored Independent Task Force on climate change, co-chaired by former governors Tom Vilsack and George Pataki. He has testified before Congress and presented expert scientific evidence to the National Academy of Sciences on climate change and on nuclear security. Dr. Levi's essays and op-eds have been published widely in journals and newspapers including "Foreign Affairs," "Foreign Policy," and the "New York Times." He currently writes the CFR blog Energy, Security, and Climate.

Please e-mail Professor Weinberger (sweinberger@pugetsound.edu) if you would like to attend…I hope to see you there!

Seth Weinberger
Posted by Zeke Rosenberg at 11:20 AM

Developing emerging young leaders
Bridging self and community
Taking learning beyond the classroom
Approaching its 16th year, LEAP's eight-week Leadership In Action (LIA) Summer Internship Program offers a unique opportunity for personal leadership development with hands-on training and exploration of the Asian and Pacific Islander (API) nonprofit sector.  Interns will be placed at a nonprofit organization four days a week and will receive leadership training with LEAP once a week.
The 2013 program will be held in Los Angeles from June 17 - August 9, 2013. (Applicants must be able to commit to the entire program) The intern will be paid $2,500 for the eight-week internship.
Applicants will be evaluated based on demonstration of leadership, community service, interpersonal skills, written and verbal communication skills, maturity and professional demeanor, and grade point average.

-          Applicants must be either currently enrolled in college or a recent graduate.

Posted by Zeke Rosenberg at 3:22 PM

Students will attend official sessions at United Nations headquarters as well as briefings at UNA-USA. Directed by Dr. Courtney Smith, Associate Dean at the Whitehead School, and Ms. Minh-Thu Pham, Director of Public Policy at the United Nations Foundation, the course is designed to familiarize students with the inner workings of the United Nations by bringing them together with distinguished practitioners working in the field of multilateral diplomacy.  The program is structured around a series of seminars led by UN officials and representatives of governments and civil society on a wide range of global issues currently on the UN agenda.

More information can be found at:
http://www.unausa.org/programs/john-c-whitehead-school-alliance/un-study-program?goback=%2Egde_742867_member_212393581

Deadline to apply is April 1st

Posted by Zeke Rosenberg at 2:55 PM

Congratulations to Eryn Eby, Puget Sound's first recipient of a Luce Scholars Program fellowship.  What is the fellowship?  Here's the description from the organization:


The program provides stipends, language training, and individualized professional placement in Asia for up to eighteen scholars every year. The heart of the year-long program continues to lie in the organizational placements arranged by The Asia Foundation for each Scholar on the basis of their individual career interests and experience....Placements institutions have included the Academy of Performing Arts in Bali; the National Human Rights Commission of Korea in Seoul; CCTV International in Beijing; the Lao Bar Association in Vientiane; the Eastern Steppe Biodiversity Project in Ulaanbaatar; and, the Vietnam Institute of Archeology in Hanoi. Placements for Luce Scholars are made in Cambodia, China, Hong Kong, India, Indonesia, Japan, Laos, Malaysia, Mongolia, Philippines, Singapore, South Korea, Taiwan, Thailand, and Vietnam. Since 1974, nearly 600 Luce Scholars have completed their year-long fellowships, and have gone on to demonstrate extraordinary leadership in their personal and professional careers. We are thrilled and proud to have Eryn represent the university and department. Way to go!
Posted by Patrick at 2:24 PM

I am writing you as colleagues in the Tacoma, Seattle, and Olympia area to inform you of the upcoming lecture at PLU in honor of U.S. Ambassador Chris Stevens killed last September 11th in Benghazi, Libya. The lecture will be delivered by award-winning journalist and Middle East policy analyst, Robin Wright, on Thursday, February 21st, at 10:30 a.m. in Lagerquist Hall, PLU. Ms. Wright's talk, "Rock the Casbah: Challenges and Solutions in the Middle East", will celebrate the life of an extraordinary public servant and former Peace Corps volunteer as she shares her views with the PLU community about recent events in the Middle East. The PLU community is honored to be joined by friends and family of the late Ambassador, including a close family member, a first year Lute.

As many of you are no doubt aware, the death of the Ambassador last September became, as one of his family members put it, "a political football," especially in the heat of the debates leading up to the election. The Ambassador's family was deliberate in avoiding judgment and chose, collectively, to channel their grief into advocacy for deeper knowledge and understanding about the Middle East, North Africa, and the relations of these regions and the United States. The Ambassador Chris Stevens Memorial Lecture by Robin Wright seeks to do just that.
More information about the event can also be found at:
http://www.plu.edu/wang-center/AmbassadorMemorialLecture/home

More about Robin Wright
As stated in her press kit, Robin Wright has reported from more than 140 countries on six continents for The Washington Post, the LA Times, The New Yorker, The New York Times Magazine, TIME, The Atlantic, The Sunday Times of London, CBS News, Foreign Affairs and many others. Her foreign tours include the Middle East, Europe, Africa and several years as a roving correspondent worldwide. She has covered dozens of wars and several revolutions. Until 2008, she covered U.S. foreign policy for the Washington Post. Wright has been a fellow at the U.S. Institute of Peace, the Woodrow Wilson International Center for Scholars, the Brookings Institution, Carnegie Endowment for International Peace as well as Yale, Duke, Stanford, and the University of California.

A recipient of the prestigious U.N. Gold Medal, the National Magazine Award for reportage from Iran in The New Yorker and of a John D. and Catherine T. MacArthur Foundation grant, Ms. Wright lectures extensively around the United States and has been a television commentator on morning and evening news programs including ABC, NBC, CBS, CNN and MSNBC as well as "Meet the Press," "Face the Nation,""This Week.""Nightline,""PBS Newshour,” “Frontline,”"Charlie Rose,""Washington Week in Review," and "Anderson Cooper 360," among many others. 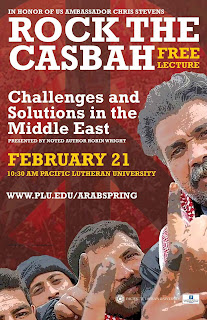 Seattle Institute for Research and Education on Human Rights

Students interested in unpaid internships at the Seattle office of the Institute for Research and Education on Human Rights (www.irehr.org ) should contact Don Share (share@pugetsound.edu) for more information.  IREHR is a national human rights NGO that focuses on issues of race and discrimination, and works on a diverse set of issues (Native American rights, white supremacy movements, anti-Semitism, etc.
Posted by Zeke Rosenberg at 11:31 AM

Nicaragua- Surviving the Legacy of U.S. Policy: THIS THURSDAY 2/7 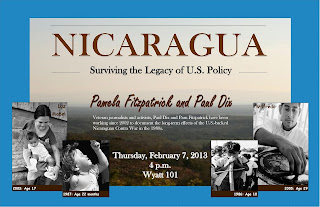 Our very own professor Rachel Demotts is currently on sabbatical in Kasane, Botswana, working with Elephants Without Borders. Her research is in the area of gendered dimensions of community-based conservation, as well as studying the increasing conflict between humans and elephants. To better understand the changing interactions between people and elephants, Dr. DeMotts will conduct participatory research in village areas along the corridors used by elephants to reach the Chobe river. Learn more about her work at http://elephantswithoutborders.org/blog/?p=1394 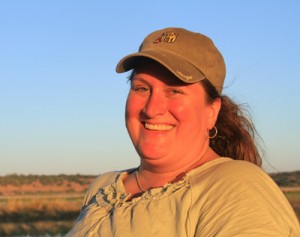